Get fresh music recommendations delivered to your inbox every Friday.
We've updated our Terms of Use. You can review the changes here.

Everything Is Pornography When You've Got An Imagination 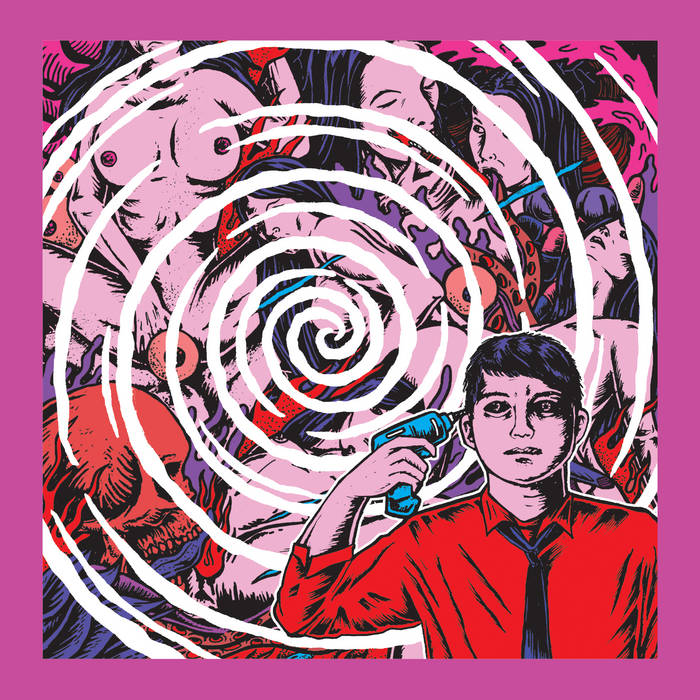 "Intercourse is difficult to categorize, and they have an arsenal of tactics up their sleeve to keep it that way. Erratic and impulsive, Everything Is Pornography… is an auditory demonstration of what it’s like to feel alienated by an administration that is actively working to challenge your very existence."

"Compositionally, Everything is Pornography is like a Jackson Pollock painting, simultaneously a technical masterpiece and a beautiful mess. The guitars thrash through quick, abrasive chord progressions and heady palm mutes, punctuated by vicious feedback and screaming dissonant notes. The bass rages through distortion and bizarre effects. Hectic blast beats and shattering cymbals drive the band into brutal breakdowns that punch like fists at the ear drums. Above this maelstrom ride the vocals of a rambling madman, screamed at fever pitch and full volume. "

"You know that scene in the zombie move where the best friend of the main character gets bitten by a zombie just as you think everything is going to be ok? This is the soundtrack to that part."

"Intercourse's method is a very intense provocation, more direct ups and downs than the elders, whimsical, always unhealthy and urgent. With that grain of voice of the singer Tarek who grabs you by the skin of the back and we let you down more, which says a lot about his despair, his disgust of his neighbor, his sex that bother him, little green men who hide, fuck full mouth and a lot of sarcasm. The black heart beats loudly. Salves fed tapping under the minute and under the belt. Fearless drummer."

"The band’s motto of “music for aliens made by mutants” continues to ring true on their latest batch of tunes. It’s a fun, maniacal mash up of stuff like Kiss It Goodbye/Deadguy and Daughters – an awkward rambling blast of violence. Everything sounds crisp and loud. The guitars sound great from the busy notey-runs to the heavier chords. The bass is beefy and over-driven and compliments the punchy and full sounding drums nicely. The vocals continue with a Tim Singer-esque style that totally floats my boat. The lyrics are great – a tense, rambling condemnation of everything and everyone. It’s pretty great. Sci-fi, sex, drugs, death, politics, it’s all there. Killer."

"Intercourse are the scummy stuff that grows where Daughters, Coalesce, See You Next Tuesday, and some sweaty, salty sass band from the early ’00’s meet, and Everything Is Pornography… is a spontaneous, freehand blend of grind and hardcore that functions in two-minute spurts of activity with no endgame and a boozy, dogged energy; they couldn’t hide that they’re from New Haven, Connecticut if they tried. But Intercourse consider themselves MUSIC FOR ALIENS MADE BY MUTANTS according to their Bandcamp, and there’s probably no better or more succinct description of what this record sound like than that. This album taught me that I am a beta cuck and I have learned no lesson more valuable in 2018. "

"Intercourse is a hardcore punk/grindcore band From New Haven, Connecticut. My first play through of this EP, left me feeling like I was hit in the face. Each track is chaotic and blistering and there is no let up in sight. The vocalist furiously yells some of the most wild lyrics I have heard in a very long time. It is hard to put this band into words, but I love it and everybody should listen to these guys at LEAST once."


"Intercourse is a three piece band from New Haven, CT who formed in 2014. Intercourse play a killer style of music that incorporates elements of hardcore, punk, grindcore, and noise rock within their sound. Musically, Intercourse can be loosely compared to bands such as Grizzlor, Fight Amp, Whores, and other like-minded bands. Since forming in 2014, Intercourse have released a self-titled seven song EP in July of 2014, a six song EP titled Enablers in April of 2016, a six song EP titled Pissing Into The Abyss in November of 2016, a split 7" with The Asound in September of 2017, and a two song EP titled I Honestly Don't Care When Or How I Die Anymore in November of 2017. Everything Is Pornography When You've Got An Imagination is Intercourse's debut LP, which was released via Constant Disappointment and Eye Tape records on March 17th, 2018. On Everything Is Pornography When You've Got An Imagination, Intercourse offer up eleven tracks of vicious, brutal, and completely unhinged sounding hardcore, punk, noise rock, and grindcore. Overall, Everything Is Pornography When You've Got An Imagination makes for a killer listen and definitely should not be missed. Highly recommended! Enjoy!"

- Dead Air At The Pulpit

Produced by Daryl Rabidoux, Mastered by Will Benoit at The Radar Studio in Clinton, CT.

Bandcamp Daily  your guide to the world of Bandcamp